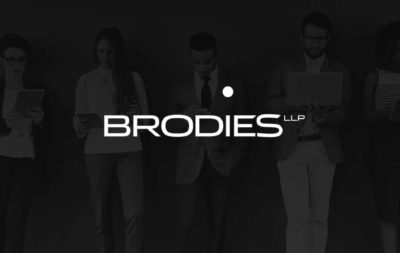 As Scotland’s largest law firm, Brodies LLP employs more than 680 staff between its offices in Edinburgh, Glasgow, Aberdeen and Dingwall. Brodies offers legal advice to private and public sector clients both in the UK and internationally in its core business areas of corporate and commercial; energy (both renewables and oil & gas); property; litigation; banking and financial services; employment, pensions and benefits; and trust and tax. The firm has a long history of going above and beyond for its clients, and has received many awards, including being named “Who’s Who Legal Scotland Law Firm of the Year” for the eighth consecutive year.

Given the sensitive nature of the data Brodies frequently works with, security is always front-of-mind. Client data must be treated with the utmost care, protecting the confidentiality, integrity and availability of both digital and physical files.

As such, Brodies maintains comprehensive disaster recovery and business continuity plans, both of which are regularly reviewed and tested. It was during one such review that an opportunity for improvement was identified.

“We always maintain a high-level business continuity plan around what we can do when things go wrong so we can keep our show on the road and protect our client data,” says Damien Behan, IT Director at Brodies. “One of the things we identified was that the solution we were using for communication during incidents or interruptions wasn’t ticking all the boxes we needed it to.”

Brodies was using an SMS messaging solution with a pay-as-you-go plan, which was less than ideal for a multitude of reasons.

It was not intuitive to use, so training and maintaining skills to use it was onerous, and the use of the system was limited to a few select individuals within the IT department.

“The problem with a solution that’s only usable by a small group is that you never know who’s going to be on the ground when a disaster happens,” explains Behan. “If a key person is on holiday several hundred miles away and there’s an incident, they may not be able to respond and may not even know anything’s gone wrong.”

Another issue the firm identified with their existing tool was that it was SMS-only – so if the firm’s emergency response team needed to communicate with staff through other channels, they had to do it manually. This introduced additional delays into a process where time was of the essence.

“When an incident occurs, people might be on different devices in different locations,” notes Behan. “They aren’t always going to be able to receive an SMS alert. But we need to get in touch with them – we have a duty of care; a responsibility to keep our staff safe in an emergency.”

Lastly, Behan and his colleagues determined that the firm needed some way of receiving information back from its staff. The firm’s crisis response team had no way of knowing what an employee would do after receiving a message.

“We realised that we could benefit from having a crisis communication solution that would allow us to do more than just blast out information to people,” Behan continues. “A platform that would not simply broadcast, but also receive information back – this would allow us to both connect with the highest number of people in a straightforward way, and to be a bit more intelligent about how we respond to incidents.

After reviewing the market with help from BlackBerry partner Appurity, the firm decided to deploy BlackBerry® AtHoc®. A networked crisis communications platform that empowers organisations to collaborate in emergency situations, AtHoc is designed for both rapid communication and better situational awareness. It allows business leaders and response teams to make more informed decisions and better protect the people to whom they have a duty of care.

“I’d heard of AtHoc, and as we currently use BlackBerry® UEM for mobility management, it was one of the first solutions that came to mind,” explains Behan. “We got in touch with Appurity to connect us with the right people at BlackBerry.”

As a Platinum Enterprise Partner and Managed Mobility Partner, Appurity has worked closely with BlackBerry for nearly a decade. The organisation’s wide range of services combined with its deep knowledge of BlackBerry’s portfolio enable it to provide a level of support few other vendors can match. In addition to facilitating AtHoc’s deployment, Appurity helped Brodies transition to BlackBerry UEM, and assists in managing the BlackBerry and Android Enterprise platform.

“We have a strong relationship with the folks at Appurity,” says Behan. “They’re very knowledgeable about the BlackBerry technology suite, and extremely helpful. They’re also quite agile and nimble – they’re quick to respond whenever we have a question or concern; they’ve proven integral in terms of supporting our BlackBerry estate.”

While the firm did evaluate a competing crisis communication platform, AtHoc ultimately won out thanks to two core factors. First, AtHoc supported a wider range of devices. Second, the firm’s existing relationship with BlackBerry was a strong point in AtHoc’s favour.

“We’ve stuck with BlackBerry through thick and thin,” Behan recalls. “It’s a company, brand, and partner we’ve known and trusted for a very long time.”

Intuitive Crisis Communication: Because AtHoc is much more intuitive than the original platform Brodies was using for crisis communication, training time is significantly reduced, allowing for a more coordinated response to an emergency.

“We have disaster recovery and business continuity plans which now all point to AtHoc as the way to keep people up to date,” explains Behan. “We’ve also been training managers in different areas on how it works and what to do should they need to use it. It’s no longer limited to just our IT department, which gives us a lot more flexibility.”

Overall, feedback for AtHoc at Brodies has also been positive.

“Being very clear and concise and having regular communication in an emergency is valuable, and is something AtHoc lets us easily achieve,” says Behan. “People know what’s going on and what they need to do.”

Enhanced Efficiency and Coordination in a Crisis: “We had an incident recently in which the central belt of Scotland – from Glasgow to Edinburgh – was hit with an incredible volume of snow,” Behan recalls. “We needed to get a warning to our staff immediately that told them to stay off the roads. Timely communication is incredibly important in such situations; you need to get the message out to multiple channels quickly, before people might put themselves in danger.”

AtHoc’s templating function – which allows a client to create a series of preapproved templates tailored to the disasters it might face – enabled the firm to quickly reach out to its staff without getting bogged down in approvals.

“The ability to send a block of text through multiple channels saves a great deal of time,” says Behan. “Having a template ready to go in an emergency is also helpful. We don’t need to worry about drafting messages and putting them through an approval process – instead, we can focus on getting information to the people who need it when they need it.”

A Voice of Authority: Brodies uses AtHoc only sparingly, communicating during emergencies to keep messages more impactful and meaningful. This has allowed the firm to ensure its messages are always received – and that staff always pay attention.

“We’re using SMS, email, and the app to send out alerts,” notes Behan. “The alerts in the app tend to catch people’s attention a bit more readily than an email or text message. And since we use AtHoc sparingly – only in emergency scenarios – it stands out more when we do use it.”

“It lets us cut through the clutter,” he adds.

Future Plans: Currently, Brodies is looking into expanding its AtHoc deployment with the use of AtHoc® Account and AtHoc® Collect. The former delivers an automated means of accounting for people in real-time, enabling two-way communication within the AtHoc platform. The latter empowers personnel with the ability to use AtHoc to report incidents on their own.

“We’ve currently only had AtHoc for a short time, but moving forward, we plan to do a lot more with the platform.”

With one app, you can protect your company from data loss in the event of any mobile threat.