The Search for the Missing Middle

Back in 1998, I was a partner and head of strategic development at a large commercial law firm. We were about to change all of our key systems ahead of the year 2000. There were a lot of reasons for this, not least the looming Millennium Bug, which turned out to be more of a stumbling mosquito with barely any impact.

The systems we were putting in were Aderant, PC Docs and Interaction. I would like to pretend we were being innovative, but in reality, we were modernising our core infrastructure software with what was then some of the best of breed systems at the time. We were adopting the typical large law firm structure of PMS, DMS and CRM despite this model being well worn and mirroring the approach we and many firms already had in place.

Fast forward to 2021, nearly 25 years later. What has happened? Well in short more has happened on digital and technology in the last 5 years than in the previous 20 years. The market pressures have increased massively: productivity, more law per hour, reporting, automation, client databases, start-ups, PropTech, data transfer and data science, the list goes on. And so, the question: why are law firms still putting in place systems which follow the same set-piece model as 25 years ago?  PMS, DMS and possibly CRM and very little else in terms of principle systems. I am not saying you shouldn’t do this. You totally should, many of these systems are very good and are tried and tested. However, in a period of unprecedented change and demand (digital and non-digital) these systems alone surely can’t be enough? Why has the basic operating model not altered? If law firms had only just been invented would you build them like this or adopt a new model much more suited to modern-day working practices? How can the same model be right given the dramatic change in demand and the marketplace?

Smaller firms have, by contrast, operated with combined PMS and Case Management systems. Although the DMS functionality is perhaps not as strong it gives them what many larger firms lack, namely the ability to automate, to drive process, collect data and to report. Most large law firms find this harder and often don’t have end to end workflow tools. One Managing Partner I know put it well. She transitioned from an all-in-one system to a best of breed PMS and DMS. Whilst they were good systems the cost of ownership escalated and processes went to pot? She is now moving back to an all-in-one system due to the operating model being better suited for the demands they are seeing.

Some firms have the best of all worlds by leveraging best of breed systems and combining them with matter management systems, giving them a higher and more flexible capability stack. Ironically, there are not a huge proportion of firms operating with this model and it may be the reason that most firms have struggled automating legal work. Yes, they can do this but without such a system it makes every job harder, and the tech stack more complicated as new solutions need to be brought in.

Another client has been superb in stating the obvious.  He openly says, “law firms have no data”. Okay, this is not strictly true in that they have documents, e-mails and financial data, but unlike volume firms, they have little or no data on the granularity of how they work. If they don’t have this, they can’t improve how they work. It also makes reporting and dashboards harder too. The traditional model alone does not deliver what law firms really need in data terms. Going forward every firm needs a Data Strategy, but how will non-volume firms deliver this with just PMS and DMS? They will be able to deliver something, but will it be enough? I don’t think it will.

MS365 has a huge amount of capability and can clearly bring a lot to the party and how law firms operate. However, will it ever solve these issues and how much work/how big a team would be needed to support it?  I think MS365 could go some of the way towards filling this gap, but I suspect it will play a much greater role in replacing other software than plugging an enterprise gap like this. That being said some application layer SharePoint systems that span document and email management, and matter management and Power BI reporting bring a new set of offerings in this space.

So, what am I saying? To me, the historical PMS, DMS, CRM model is no longer enough. You absolutely need these foundational systems (or their equivalent) but to truly perform law firms need something else.  Namely, the missing middle which sits amongst or above all of your traditional systems. Over 15 years ago I started looking for this with my then IT director. We were both passionate about the vision and had the budget but were never able to find that elusive element.

That is until now. Some new contenders have hit the market in recent years. Just imagine for a moment a system that would do a lot of the following, over and above your traditional systems:

Some may see this as the stuff of fantasy, but it is now possible, and there are tools in the market that can deliver this for firms who really want to deliver a step-change in how they work.

This may not just be the missing middle; it may be the final piece of the jigsaw that enables firms to thrive in a way never possible before. The missing middle may finally allow firms to truly get under the skin of automating legal work in a way never previously achieved. It may be the toolkit both lawyers and IT departments need to really raise the bar on efficiency and client service. In a post-Covid world of hybrid-working this probably more important than ever. 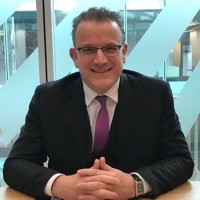 Hyperscale Group
Derek Southall, founder and CEO is a high profile and very well connected figure in the legal technology, innovation, knowledge management and digital marketplaces. Derek has spent nearly 25 years in a range of leading strategic roles for a top 50 global law firm, for most of this time as a Partner and Head of Strategic Development and subsequently as Head of Digital and Innovation. During this period Derek oversaw and helped drive growth from £27 mil TO to in excess of £425 mil TO as well as driving and supporting numerous mergers and international expansion to 18 offices in 10 countries. Derek was ranked by the FT as one of the top three most innovative lawyers in the UK in its first study into the legal market. Derek also led the firm’s technology team to become ranked as the most innovative in Europe and subsequently the firm to ranked as the second most innovative firm in Europe as well as picking up a range of other awards. Derek has been the relationship partner for a long list of major household name clients in a range of sectors including Automotive, FMCG, Financial Services, Food and Drink, Fashion and Construction and has a strong track record in sales and product delivery. Derek has been ranked three times in the last three years as an Acritas Star for outstanding client delivery (based on independent feedback). Derek chairs and was one of the founders of the Legal IT Innovators Group (www.litig.org) which has 80 or so of the top 100 firms as members and which plays a key role in driving ahead technological thinking and change for the good of the legal profession. In this role he has worked alongside the United Nations and a range of other large organisations. www.hyperscalegroup.com recently joined forces with two other leading advisory businesses in the fields of technology, operations and financial management to create the www.intuityalliance.com which has been referred to as the “Holy Trilogy” of Legal IT. Its purpose is to pool experience and intellectual knowhow to ensure we have a more holistic approach to how they give advice. Derek also serves on the advisory boards of several start-ups and has recently been appointed to the advisory board of the Global Institute of Innovation, which brings together around 400 academics to solve some of the world’s biggest problems.