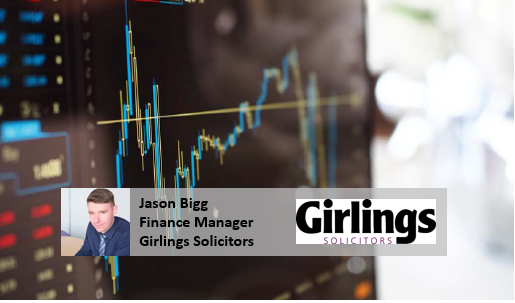 Before joining Kent-based Girlings solicitors as finance manager in November 2018, Jason Bigg was a fee earner in an accountancy practice. Experience which he says has been invaluable in navigating the current challenges.

Since he joined the firm, he has helped to introduce a new practice management system and restructured the six-person finance team, both at the end of last year. Just as these changes were bedding in, the coronavirus crisis hit, and it was a case of all hands on deck. The firm has a wide mix of disciplines with some of these being badly affected by lockdown, with around a 20% drop in monthly billings. As a result, although his role is ostensibly board level, Jason has had to undertake additional operational tasks over the past two to three months as the finance team has helped the firm to adapt to the change in circumstances.

“The balance of our work has changed considerably. We used to spend a lot of time processing financial transactions. Now we are doing much more management reporting (to assist with decisions such as the furloughing staff), looking at fee-earner performance to identify likely fee income of the business and identify the productivity levels of each department. Previously, we were reviewing fee-earners on a monthly or quarterly basis, but we’re doing it almost weekly at the moment to see if there are any trends we need to respond to,” says Jason.

One of the first issues the firm needed to address was technology. With the firm moving to remote working, there was an urgent need to ensure everyone had access to up-to-date, reliable IT and ancillary equipment to be able to do their jobs effectively. “We ordered about 40 laptops, which had to be setup to our own specifications. We made sure people had monitors, keyboards, chairs, mouse mats and anything else they needed, some of these items were taken from desks in the office. I also had to immediately update many of our internal finance policies and guidelines. For example, many fee earners still sent payments to their clients via cheque. That’s no longer possible, so we had to quickly bring everyone up to speed on our new BACS-only payment process,” he says.

Despite the challenges, he says the remote working model was up and running efficiently within a week. The backbone of the model is a remote desktop link-in. Rather than using the cloud to host the firm’s data, it is stored on its own servers, with back-ups off site, and staff have remote access to the servers. This is supplemented with specific tools to manage certain tasks, such as Tikit’s Partner for Windows credit management system.

With the reduction in work on the billings side, Jason has been able to reallocate team members to other roles, such as debt collection and credit control, although he says the level of debt to bills has not risen significantly. Partner for Windows, which was fully integrated into the firm’s practice management platform just a few weeks before lockdown, has helped to drive efficiencies in this area by automating many previously manual tasks.

One area where the finance function has implemented a change in approach is cashflow forecasting. Previously, Jason and his team would look at the firm’s cashflow statements for the month ahead. However, the uncertain financial environment has meant he is now trying to forecast cashflow for the whole year, so the firm can budget for the longer term.

“In addition to the normal annual budget, we’re trying to project out cash movements for the next year. An area that has been the trickiest is the likely billing amounts per department. Using the reduction in the first month of lockdown, we extrapolated that for the year ahead based on the level of reduction we saw that month. We are reviewing fee income every couple of weeks at the moment, rather than once a month, so we can budget for the cash coming in,” says Jason.

Cashflow forecasting and budgeting is largely a spreadsheet-driven process, he says, and although prelockdown the firm was considering investing in more powerful data analytics tools, plans are on hold for the moment.

Within the firm, he says there has been a slight change in the perception of the finance function. Inevitably, there are still some who see finance as a back-office administrative function with a penchant for introducing new processes and procedures. But at the same time, he says, many fee-earners have appreciated the way finance has swiftly responded and helped the firm adapt to the new environment.

“It’s about finding a balance between introducing new policies such as digital-only payments, while not hindering people in the way they like to do business. We don’t get it right all the time. Some people thank us. Some people moan about us. But in the long run, we’re all working towards the same goals,” says Jason.

Engaging with fee earners
No matter how many times you ask people to follow the new guidelines, there will be a hardcore few who insist on doing things the old way. But don’t give up! Keep engaging with them and explaining the benefits – they’ll get on board eventually.

Managing billings and cashflow
This crisis is so unprecedented that there are no models you can learn from. The state of uncertainty means you have to be absolutely on top of your cashflow situation at all times.

Rethink your IT hardware
Many firms will be reviewing their IT budgets postlockdown. Is it better to host in the cloud or on local servers? Desktop PCs or laptops with docking stations? Questions like these suddenly take on a new urgency.

Over the past year workers’ stress associated with the interruptions caused by remote working – such as Zoom meetings, deliveries …

Report Maps Out Road to Sustainable Growth for Law Firms

The Value of Project Management and Understanding the Different Approaches

The Value of Project Management You would never see a large bridge constructed or a skyscraper built without project management. …