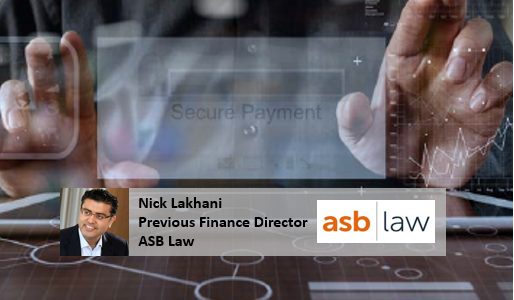 No more excuses for digital laggards

“I don’t think the current pandemic has been the trigger for finance functions in the legal sector to change. The real change came in the financial crisis of 2008/09, when perceptions changed and the finance function was finally recognised for the valuable role it can play in driving performance,” says Nick.

“I joined ASB the day after Lehman’s went bust in September 2008, so I was straight in at the deep and. The things I did then – like regular conversations with banks, regular cashflow forecasts, working capital management, stakeholder communication, keeping a calm head – are the things law firm CFOs should be doing now.”

Nick suggests firms should be producing regular cashflow forecasts to help them navigate the crisis based on three scenarios: worst case, best case and most likely case, before choosing one to proceed with.

“Banks really want to see that you’ve considered all the implications of the crisis and what it means for the business, and see that your cashflow has been stress-tested to deal with these scenarios,” he says. “It’s the bare minimum stakeholders will be asking for during these times.”

He believes it is vital to review cashflow at least weekly, if not daily, given the drastic change in the economic environment. Firms that rely on transactional work, in particular, are likely to be suffering a substantial reduction in new matters, which are unlikely to return to normal levels for some time.

Nick’s role at ASB Law also covered IT. It was in this IT leadership role that Nick guided the firm to outsourcing its IT infrastructure to the cloud in 2013. It was a move that, “in my opinion, proved to be one of the best investments we ever made,” says Nick. “In particular, it has been returned many times over in the past few weeks alone.”

It enabled the firm to move to remote working seamlessly without any issues at all, because everyone was already used to working in the Citrix desktop environment. Every piece of information that was available to them at their office desk is just as accessible from a remote location.

The firm also invested in a new Peppermint paperless practice management system, which is aligned to remote working. As Nick explains: “if you take the example of a payment from a client account, previously we’d have lots of what we called ‘pink slips’ moving around the office, being signed by different people. Now it’s all done digitally. So the fee earner requests a payment, it’s then approved by the partner, the details are checked, it goes via the workflow to the finance department and they send the payment – without a single physical piece of paper being involved. That, combined with the cloud infrastructure, has led to a pretty seamless transition to remote working.”

The impact of the pandemic and ensuing lockdown has certainly sharpened the focus on the role of the finance function in professional service firms. But Nick doesn’t believe it has fundamentally changed that role. He worked hard at ASB to move the finance function from being a back-office, deskbound, reactive function to a more proactive, forward-looking function with a valued influence on decision making.

The crisis has only served to confirm that transformation, rather than cause it.

One aspect that has been highlighted, however, is the need for law firms to fully capitalise on the  potential of technology to drive the performance of their business. He cites the example of the electronic file, which has long been an aspiration for many law firms, with a correspondingly long list of excuses not to do it. Now is the time to stop the excuses and get serious, he says.

“What many firms have is a hybrid system. They have half the information in an electronic file, and half the information in a paper file. So when it comes to working from home, it’s hard to get a full picture. The current crisis has shown that there are really no more excuses for not fully embracing the capabilities of digital technology to increase efficiencies and reduce costs,” says Nick.

Be hands on
The most senior finance person in the organisation needs to be much more hands on at the moment. That means reviewing pretty much everything that goes out of the door to ensure cash outflows are minimised and to mitigate the inevitable contraction in inflows.

Check in on remote employees
Some people miss the physical connectivity of being in an office, so don’t leave them isolated. Make the effort to call or video-conference to see how they are doing and keep them involved with what’s going on outside their specific role.

Talk to your clients
This is a good time to touch base with clients, so they don’t feel abandoned. It is an opportunity to strengthen that relationship, maybe offer some free advice or webinars. In the long term it will pay off.

Nick was Finance Director of asb law, a full-service law firm with offices in Crawley and Maidstone, with 89 fee earners. It won an award for ‘new business and service delivery Models’ in the FT Innovative Lawyers Awards Europe 2018. In July 2020, it was acquired by professional services group, Knights.